Yuna Shimazaki (島崎 由那, Shimazaki Yuna), pen name Setsuna Shimazaki (シマザキセツナ, Shimazaki Setsuna), is the Creator of Altair and a friend of Sōta Mizushino who committed suicide by letting herself get run over by a train.

In Episode 11, Sōta Mizushino reveals to his friends that he knew Yuna and that they were friends. Sōta added that he was the one who killed her. Yuna and Sōta met online when she commented on one of Sōta's drawings, and the two of them liked each other's work, so they exchanged emails and continued to write to each other. Setsuna eventually invited Sōta to go with her to a Hakoniwa meetup, and the two of them met each other in real life at the train station. At the event, Sōta and Yuna went onto the second floor of the building to get a better view of the live drawing. Yuna tried to get a better look and was about to fall over when Sōta saved her, but Yuna lost her glasses in the process, so Sōta offered her to use his glasses. Sōta continues telling his friends that he continued to talk to Yuna afterwards, and Yuna kept posting new drawings. Eventually, Yuna became popular on the site, and was praised as an up-and-coming artist. Yuna sent Sōta a text message telling him that she will be making a video with Shimashima, who is a famous producer, and that she is a big fan of his, so she is nervous. Sōta stopped trying to contact her after he felt that there was a lot of distance between the two of them. Yuna was then accused of plagiarism in an online news article and received a lot of criticism in the message board.

Setsuna is Altair's Creator. She is glad that she was able to draw Altair into the world and happy that everyone loves her. Setsuna really likes Altair. 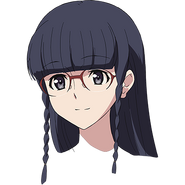 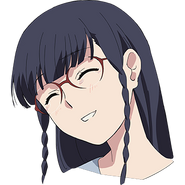