Aki Toyosaki (Japanese)
Michelle Ruff (English)
Altair (アルタイル, Arutairu?), also known as Military Uniform Princess, is the primary antagonist of the anime series Re:Creators and the secondary and penultimate creation of Setsuna Shimazaki before her suicide, based on Shirotsumekusa (シロツメクサ) from social game Eternal Wars Megalosphere (悠久大戦メガロスフィア Yūkyū Taisen Megarosufia). Her real name was revealed to be "Altair" and she came from an online music video called Altair: World Étude. An independent existence without a story. She is responsible for bringing the Created into the real world. Her plan is to make the worlds collide by getting the characters she brought into the real world to fight thereby causing the destruction of the rationality of the real world, and to ultimately bring about great destruction and cause everything to return to oblivion.

An in-depth explanation and analysis on Altair is given here.

Altair has long white hair and piercing red eyes, which have a bluish-green box in them. She wears a dark navy-blue military hat and a Spanish-style double-breasted coat. Because of this, she is called "The Military Princess".

Unlike the other Created, who are incognizant about the fact that both themselves, their experiences, and the worlds that they dwell in are considered to be fictional, much less know anything about their Creators, Altair is not nescient about such information. Rather she is completely au fait about her own existence, about the real world, as well as her creator, Setsuna Shimazaki, who Altair had strong love towards. When Setsuna's suicide occurred, Altair shows great hatred towards the real world to the point where she wants to destroy it.

Altair first appears in episode 1 when Sōta Mizushino is brought into Selesia Yupitiria's world where Sōta watches Altair and Selesia fight each other. During the fight, Altair was surprised to see Sōta, and Sōta and Selesia were transported back to the human world. Altair arrives at Sōta's home in the real world , and Sōta and Selesia flee. Altair then fights Selesia, but then had to retreat when Meteora Österreich arrives to help Selesia.

Setsuna was the Altair's Creator. She is loyal to Setsuna. Upon learning that her Creator was abandoned by the world of the gods. the Military Uniform Princess made it her mission to have the world be destroyed as vengeance. When Setsuna is revived, Altair fights against fate itself and creates a new universe for Setsuna to live in so Altair can write Setsuna's story while Setsuna writes Altair's story.

Altair hates Sota for his part on Setsuna's suicide. Upon first seeing Sota, Altair didn't hesitate to attack him. She still hates that Sota relied on a dirty and cowardly trick to revive Setsuna, but considering how much Altair went out of her way to keep Setsuna alive, it is possible that her sentiments towards Sota have softened quite a bit, especially after Setsuna explains that Altair was created to show off to Sota. 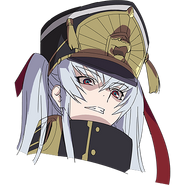 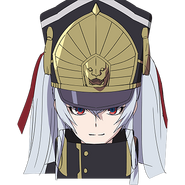 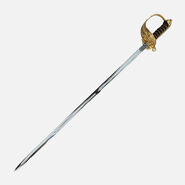 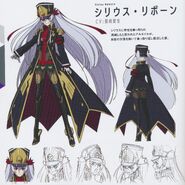